Click on your product family below to see a list of downloadable PDFs to help you troubleshoot and resolve common product issues.

A TALE OF TWO AERATION SYSTEMS

One, the one shown on the right (top picture), was owned by Scotty DoRight.  Scotty followed the recommendations given him by the manufacturer and the service provider and was very diligent where maintenance was concerned.  He purchased a service contract for his system and was careful not to do anything to upset the biological action taking place in the system with harmful chemicals.  This system thrived and went many years without any mechanical issues, alarm events or pump outs.  Scotty’s system was happy, healthy, and did not pollute the environment.  That, along with the low operations cost, made Scotty very happy.

The other, owned by Sandy McCrappy was a very unhappy system.  It is the one pictured on the right (bottom picture).  Sandy ignored all of the papers that she was given at installation.  She ignored all of the advice given to her at the time of installation by the contractor and the public health department as to how to properly operate and maintain her system.  As a result, about every two years she had to call a service provider because her alarm was going off.  The service provider informed her that there were no mechanical problems and she needed to schedule a pump out.  This made Sandy very unhappy as well. Sandy tried to blame the manufacturer of the system, and that did not work.  Then Sandy tried to blame the installer for doing a bad job.  After that, Sandy tried to blame the Health Department for not making the manufacturer and the installer, “make it right.”  Sandy blamed every one except the guilty party, HERSELF!  Sandy had to pay the pump bill, and after listening to another round of advice from both the manufacturer’s representative and the health department she said she’d try to change her ways.  But, to no avail, She apparently forgot everything that was discussed as soon as everyone left the driveway, because two years later, Sandy’s system was unhappy again and sounded the alarm again, only to repeat the process, pay another service provider, and pay another pump out fee.

To Scotty DoRight I say GOOD JOB!!!  To Sandy McCrappy I can only say this, the Bible says, the way of a transgressor (rule breaker) is hard.  Over five years you have experienced approximately $600.00 worth of additional expense in service calls and pump outs that were completely unnecessary.  As with The Word of God, all you had to do was observe the written word, in this case your owners manual; Study to show yourself approved, rightly dividing the word of truth, in this case, seek out products to use in your home that will not destroy the necessary bacterial levels; and listen to the spoken word of those who know what they are talking about (the ministry).  If you had payed any attention to those who have authority over you, (the health department) I am sure most if not all of this could have been avoided.  It is yet to be seen if Sandy McCrappy has learned her lesson, or if the cycle will repeat itself in a year or so.

It is important to make sure all of the readers understand that the two systems pictured above are the same. Scotty’s system has never been pumped, Sandy’s twice. The only difference is THE PERSON LIVING IN THE HOUSE, (THE OPERATOR). Everybody who owns a private septic system of any kind is after all, there own wastewater treatment operator. 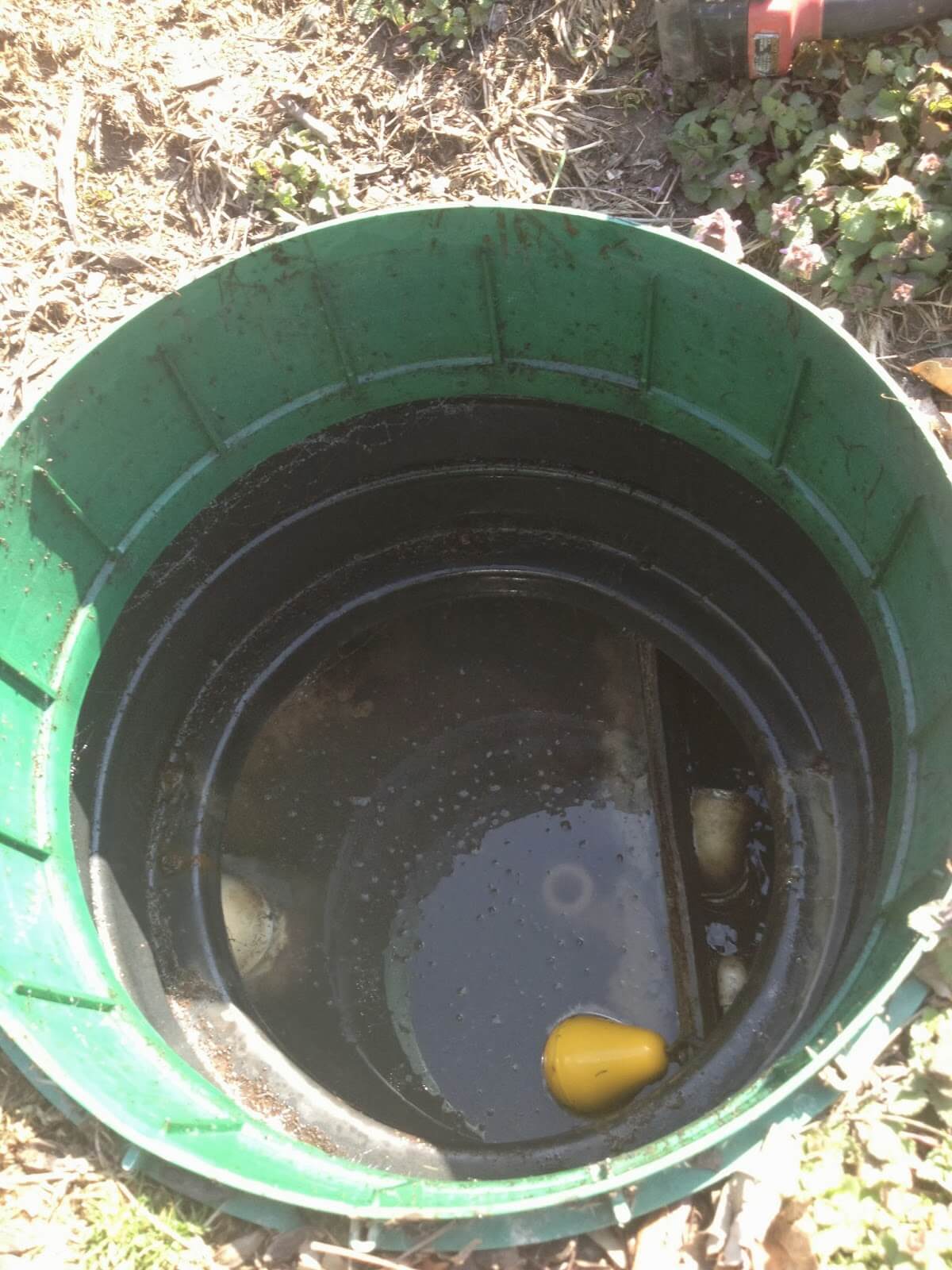 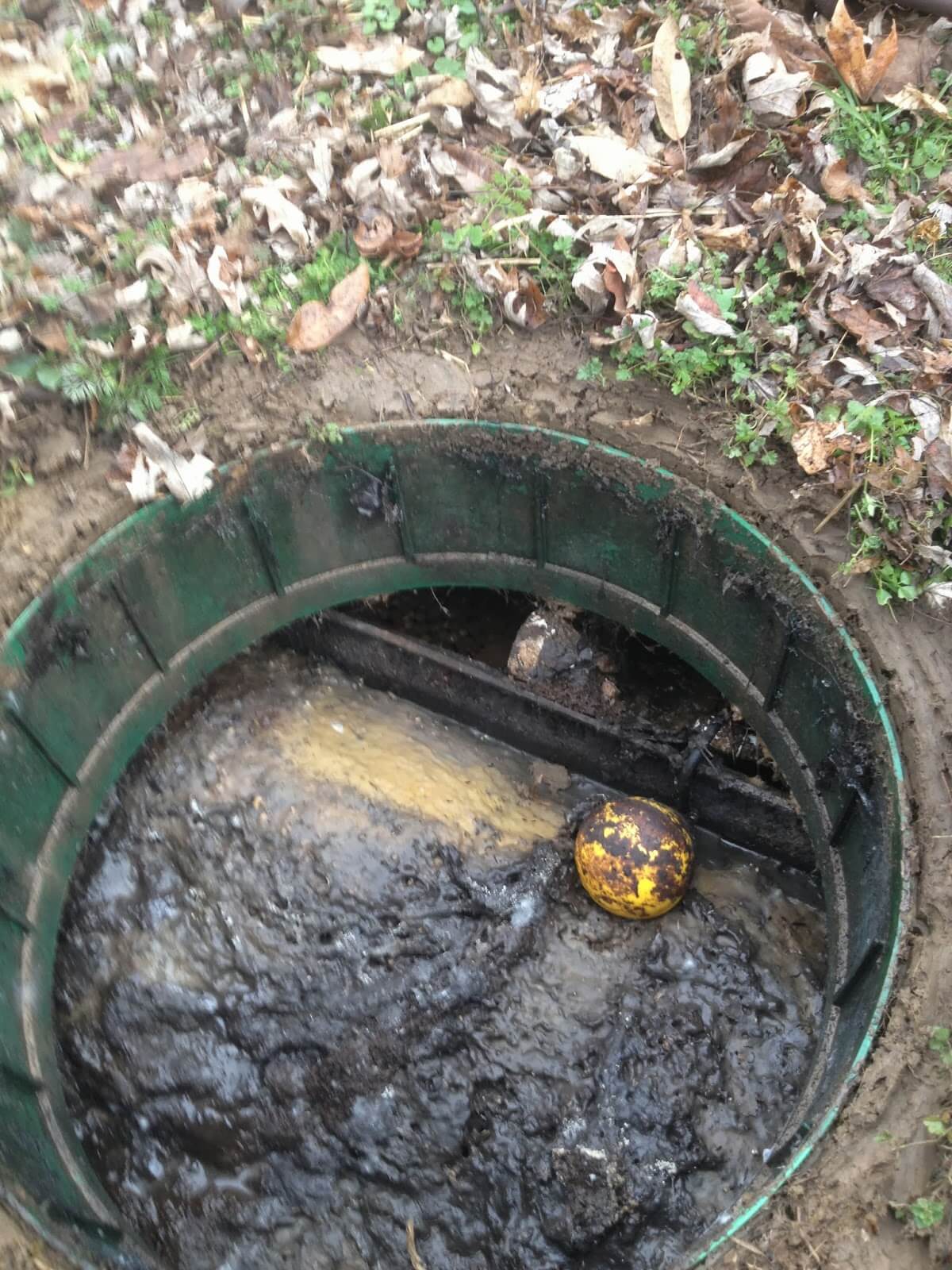 IMPORTANT: IF YOU OWN A PRIVATE SEPTIC SYSTEM, READ THE LINK BELOW!

For at least 10 years, I have been telling all of my customers that these supposedly flushable wipes are a problem.  I TOLD YOU SO!!!!  Finally the news media catches up with those of us out here in the field actually observing the problem.  Do yourself a favor: LISTEN TO YOUR SERVICE PROVIDER, otherwise you might end up like Sandy McCrappy.

Disclaimer:  The above story, A tale of two Aeration Systems is true.  Only the names have been changed to protect the transgressor.

Disclaimer:  Any septic advice you may receive on Dunghill  Chronicles is subjective to personal opinion.  I am not a scientist and do not have a degree in anything.  I will not be using a lot of fancy terminology, only providing common sense advice based on my vast experience in the field servicing, and installing hundreds upon hundreds of private septic systems.

What Not To Do

Here are a few issues we have had in the past when customers didn’t follow the giudlines of our product installations.

Make sure to read through them for you know what not to do.

This is what the clarifier section of a biologically healthy and properly operated Aquaklear 500F unit looks like. Notice how the water is clear enough to see below the surface. If there is a sludge build up or scum layer on your system, it means the following.

The bacteria, is either dead or in a weakened state due to the use of harsh chemicals of some kind. Aerobic treatment systems regardless of brand cannot maintain the appropriate amount of micro organisms if harsh chemicals are used, in any application. Laundry, house hold cleaning, prescription medications, hair and perm solutions, insecticides from pet bathing, etc. can be a few of the causes of sludge build up, or erratic water usage. Water usage in the home needs to be spread out to eliminate large surges in usage. Large surges over load system capacity, and hydraulically push untreated waste, and micro organisms pre maturely through the system. This will cause odor and create the need for premature pumping of tank. This creates a nuisance condition and adds to operating cost.

This photograph is of what the inside of a AK500 F looks like after tree roots have infiltrated. This needs to be closely monitored as it can do severe damage to the tank and internal components. This homeowner was advised to remove trees that were adjacent to where this system had to be installed, because the roots had destroyed his previous tank. He did not comply with our request, and recommendation of both us and Public Health. The result after 11 years is seen above.

Do not plant trees in close proximity to your septic system, tanks, and lines. Irreparable damages can result.

*Warranty, or extended service plans do not cover damage done by tree roots.*

Always keep your tank full of water. Never allow a tank to sit in the ground empty. This unit was pumped one week before Christmas. The property owner and tenant were on site during the pump out and was advised to immediately re fill the unit to avoid floatation. This was what we saw when we got the call two days later. This was a very unnecessary and expensive repair that should not have had to happen, and created an unnecessary emergency. Empty septic tanks, concrete or fiberglas, can float if left empty in the ground. There is no such thing as a septic tank that is not “full”. 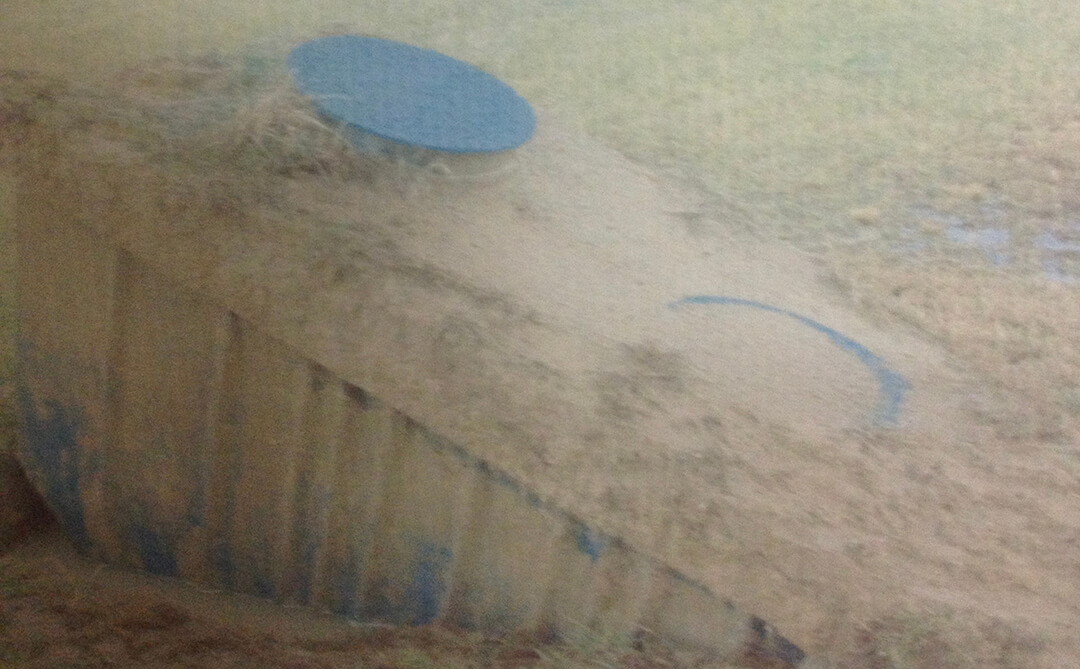 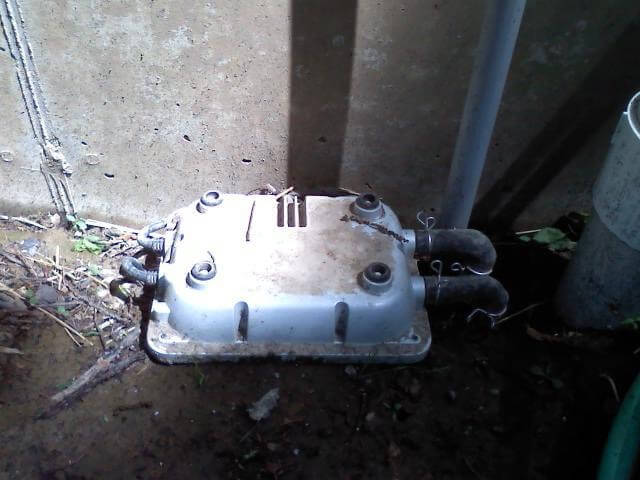 This is not a joke, the picture on the left is of an improperly installed AK500 air pump. This was done by a customer who called us and said something was wrong with his system and asked us to send out a tech. (notice the four feet sticking up in the air, the pump is upside down). When questioned by the tech, He said it fell over, and he “repositioned” it. The compressor was damaged beyond repair, as the air filter is on the top. To the right is a picture of what a properly positioned air pump should look like. 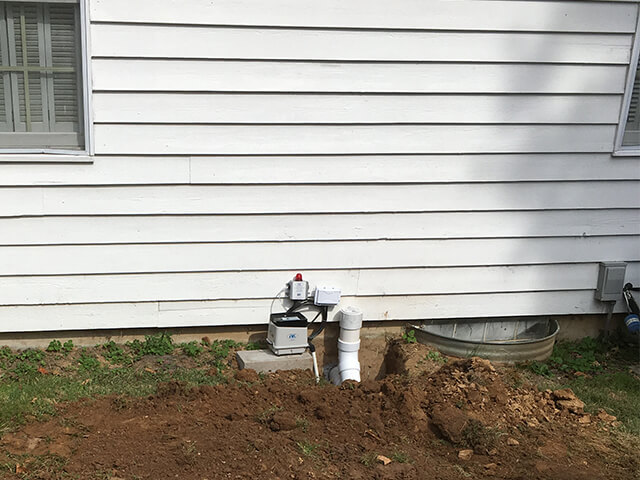